The word communication literally means “to make common.” At its most basic level, it means letting your needs be known. At its highest level, communication means building strong, trusting relationships with people whose perspectives are very different from your own. The educator and psychotherapist Virginia Satir wrote, “Once a human being has arrived on this earth, communication is the largest single factor determining what kinds of relationships he makes with others and what happens to him in the world.” It also determines whether you are capable of being a highly effective leader.

Much of my work in developing leaders and leading organizations focuses on communication. Since publishing Straight Talk® in 1998, I’ve continued to develop my understanding that people can develop four different levels – or “powers” – of communication. Here’s a description of these four powers.

The First Power: Expressing Yourself

From the moment we pop out of the womb, we start expressing what we want. We communicate we are hungry, or sad, or happy. Over time, we learn how to use words. We learn how to name simple emotional and mental states. By the time we’re adults, we’ve developed a full array of strategies to express how we feel and what we want.

Yet even as adults, we are still working on this first power. Adults, rather than getting straight to the heart of what they want, often beat around the bush, deflecting attention from the real issue or need out of the fear of losing “face” – a fear of exposure, a fear they will look silly, a fear they will lose authority or power. Yet learning how to express ourselves even when it feels emotionally charged and sensitive is all part of mastering the first power.

The trick is to learn how to express our “inner scripts” – the things that might embarrass us if we express them – in a way that shows we are genuinely conflicted about them. 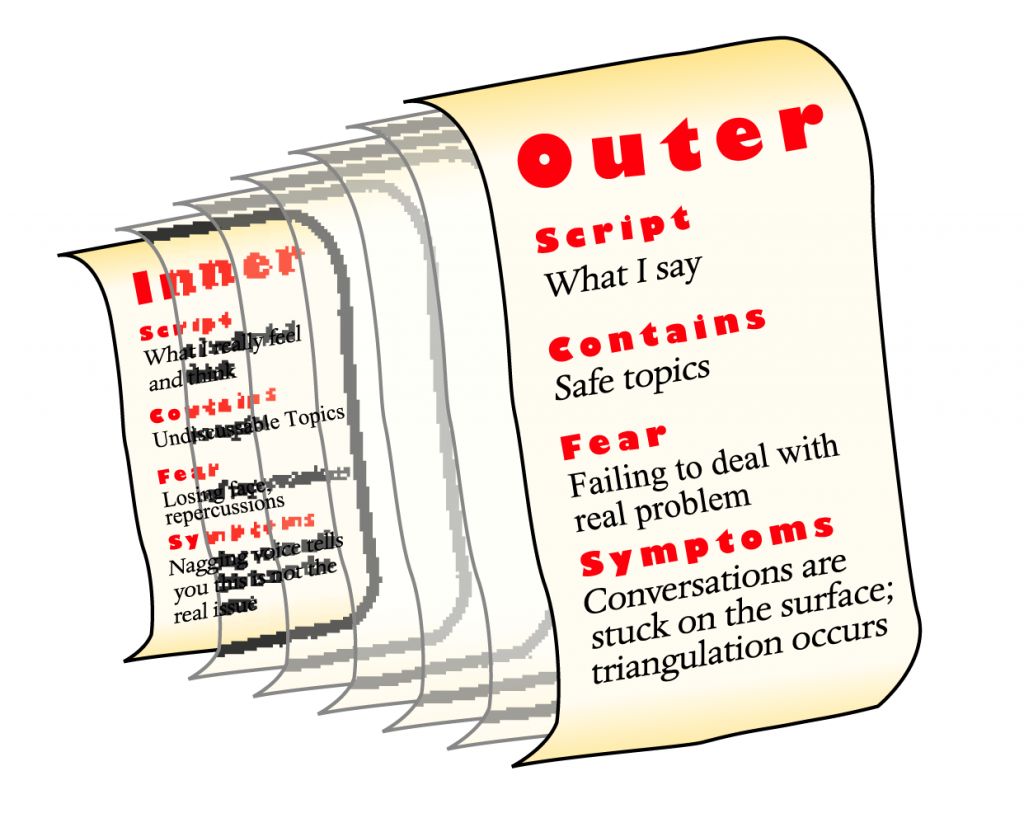 The Second Power: Listening and Responding

Soon after we pop out of the womb, we also begin learning how to respond to others. We laugh at funny faces. We sense other people’s moods. As we gain the use of language, we respond with words. By the time most of us reach age five or six, we can share our thoughts and feelings with another person and build fledgling relationships.

As we grow older, we learn how to participate in a conversation, recognizing that the other person deserves our respect and attention. We begin to establish patterns of speaking and listening based on the notion of reciprocity and trust building.

At a more advanced level, people who master this second power can extract a deeper meaning from a conversation than simply what is said. They can paraphrase what they’ve heard. They can interpret what someone means and add layers of meaning to it.

They can validate their interpretation and, by so doing, create deeper bonds of trust with other people.

People with the third power show a level of self-awareness and self-control that distinguishes them from second-power communicators. People with this power can vary their level of attention and their level of intent, thereby achieving high levels of emotional intelligence. Let’s talk about attention first. There are four levels:

There are four levels of attention you can bring to any communication:

Third-power communicators are aware of the quality of their attention and display the social and political awareness to select the appropriate setting. For example, if they’re listening to someone who’s having problems with a colleague, they may choose to respond analytically: “I’ve had similar experiences. I know what you’re going through. Here’s how I handled it.” Or empathetically: “I can really appreciate how you feel. How can I help?” Or creatively: “It’s amazing that happened to you. Let’s think of some ways you could deal with the situation.”

Third-power communicators are also conscious of their intent and can vary it. There are four types of intent: affirmative, controlling, defensive, and relinquishing. Only the first is positive. The others lead to conflict. Third-power communicators are able to use an affirming intent 90 percent of the time. Even in the middle of a heated debate, they’ll say: “I hear what you’re saying and I respect your views—even though we disagree.”

Regulating the levels of attention and intent enables third-power communicators to show a high level of emotional intelligence. Daniel Goleman, who popularized the term “emotional intelligence,” has shown that the most successful leaders display emotional intelligence competencies like self-awareness, self-regulation, motivation, empathy, and social skill and are therefore able to build deeper and more satisfying relationships.

Part of emotional intelligence is speaking consciously from the “I.” For example, rather than saying “that wasn’t clear” to someone who just suggested an idea, you could say: “I feel confused. Can you clarify this for me?” People with this power can also communicate subtle nuances and flavors of emotions. For example, you might say to a colleague who’s just gotten promoted: “I’m jealous you got that promotion, but I’m also really happy for you. Excuse me if I seem just a bit conflicted.”

In sum, to assess your third power skills, ask yourself: “Am I conscious of my attention? Do I exert control over it? When I’m listening, am I fully in the conversation? Do I tune my mind to hear not only the things the other person is saying, but the things she is not saying? Do I ask good, affirming questions designed to deepen my understanding? Do I affirm the other person’s point of view, even if I disagree with it?”

If you can answer yes to these questions most of the time, then it’s a good sign you’ve mastered the third power of communication.

The Fourth Power: Understanding and Responding to People in Their “Style”

To master the fourth power, you have to recognize that even when people are speaking the same language, they may be talking and listening past each other within different frames of reference and operating assumptions. You have to learn how to identify these different styles, and then learn how to vary your communication style depending on the situation. The fourth power means knowing how to foster better communication by varying your style.

In my book Straight Talk: Turning Communication Upside Down for Strategic Results at Work, I described the four different communication styles: the Director, Expresser, Thinker and Harmonizer. Each of these styles operates from a different set of assumptions. Here’s a quick snapshot:

Director: Directors are hard-charging, action-oriented leaders, focused on results. The director’s style of communicating is assertive and task-oriented. Directors operate on the assumption that quick action and decisiveness are valued, and that people are rewarded for getting things done, the sooner the better. Directors frame the world as a competitive place of action and decisiveness.

Expresser: Expressers focus on leading through their creative ideas. The expresser’s style of communicating is assertive and people-oriented. Their operating assumption is that people should feel free to voice their opinions, think outside of the box, and articulate what they feel. They like to entertain. Expressers frame the world as a place where people are recognized for their personal creativity and achievement.

Thinker: Thinkers are detail-oriented leaders and focused on what it takes to get the job done right. The thinker’s communication style is less assertive than the Director and Expresser. Like Directors, Thinkers are also task-oriented; they assume that there’s a best way to do things – and it’s their job to make sure no mistakes are made. They feel rewarded when a task or project is done well. They frame the world as a place in which to solve problems and get things done.

Harmonizer: Harmonizers lead by supporting others. Their communication style is also less assertive than the Director and Expresser. Like Expressers, Harmonizers are people-oriented. They operate on the assumption that they need to look after the needs of the team and other people’s welfare. They feel rewarded when the team performs well. They frame the world as a place where relationships with people are the most important aspect of their lives and prefer to work collaboratively.

People are not simply one of these styles, but an amalgam of all four. To understand how you communicate, you need to know how strongly you exhibit each of these styles. (Discover your style and invite your co-workers to compare with this free survey.)

The fourth power encompasses the highest level of self-awareness. Because they are conscious of people’s styles, people with this power can use that awareness to shape how they listen. This is truly powerful listening. As they listen, they are able to apply the matrix of communication styles. They can quickly identify the underlying frame of reference and respond in that frame. For the person being listened to, it’s an amazing experience. “I feel truly understood by her when I’m talking with her,” is how one person describes it. The difference can be gauged by the reaction you elicit. When you engage in the fourth power, you elicit honest, heartfelt trust. People share their most sensitive stuff. People feel that you truly value their point of view.

What’s important about the fourth power is that it can be learned. It begins by learning your own style. You then need to learn how to decipher other people’s styles.