When you take the Straight Talk® Survey, the first payoff is discovering the communication styles you use most often – Director, Expresser, Thinker, or Harmonizer. We tend to favor two styles over the others, but we have the ability to use any of the styles in different situations.

To read about the four basic communication styles, Download the PDF. 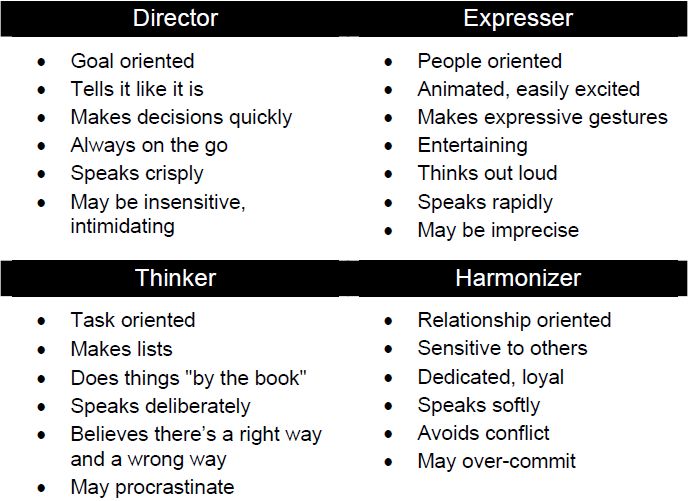 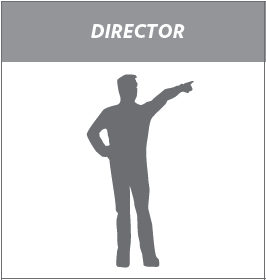 Imagine someone who likes to get things done—whether it’s building a new product or starting a new company. This person is a Director, one of the four basic communication styles.

The Director talks about actions. Directors don’t have much time for small talk or social niceties. In fact, they can be a little uncomfortable around people. They’re quick to make decisions, quick to assign tasks, always on the move. Imagine Orson Welles in Citizen Kane and you’ve got a good mental image of the Director.

Directors tend to focus on doing, not listening. They don’t tell long stories or inquire into the health of your children. But they do talk about goals, about getting a jump on the competition, about the importance of getting the job done. That’s the key for the Director: completion; getting it done. Now, not later. “Give me the bottom line” – that is one of the Director’s favorite phrases.

Directors take risks. They’re willing to make tough decisions and gamble. Directors like to be in charge. Because Directors focus on getting things done, not on people, they can at times appear insensitive—even intimidating. We’ll explore later how to deal with this.

In sum, Directors emphasize action and results. They’re great at setting goals. Without the Director’s drive, vision, and decisiveness, the world would be a much more static place. 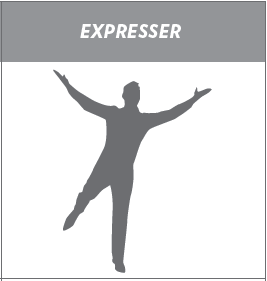 Now imagine people whose modus operandi is expressing themselves, talking about their ideas and opinions and feelings and experiences. These people—the Expressers—are great talkers. They like to gesture and use animated facial expressions to make a point. You’ll find them describing what they felt when they bought their first new car or dreaming up a clever advertising campaign. Unlike Directors, Expressers like to tell stories. In fact, they’re so animated and expressive when they tell stories that they may make other people feel limp. But give them credit: Expressers are entertaining to have around.

Imagine David Letterman or Carol Burnett. Expressers have lots of ideas and thoughts going on at once, sometimes so many that the ideas tumble out of their mouths before they’ve had a chance to edit them. In fact, thinking aloud is one trademark of the Expresser.

Expressers are creative, always trying to find new ways to do things. They’re willing to take chances, especially if their creative reputation is on the line. They’re fun to invite to a brainstorming meeting—they’re always coming up with an out-of-the-box idea. Yet they can also be disorganized and lack follow-through.

Expressers have a hard time focusing on one topic and listening. They lack a long attention span for something that doesn’t involve or interest them. This can be frustrating for the people around them. So Expressers can demand a lot of patience. At the same time, Expressers tend to be sensitive to other people’s feelings, and they express great embarrassment once they realize they’ve said something that hurt someone else.

In short, Expressers are dynamic, dramatic, exciting, engaging, and entertaining. They may not always be organized. But without them, the world would be a much less interesting place. 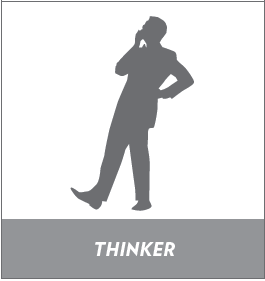 Now imagine people who like to solve problems. They like the process of working through all the details, the nuances, the ramifications, and implications. These people—the Thinkers—are focused on getting things done right. Their exacting sense of detail drives them to ask lots of questions.

If a Thinker is considering buying a new computer system, for example, she’ll ask for all the comparative data. She’ll make sure she has all her facts exactly in order. She’ll make a list of the features she wants (the list is a trademark of the Thinker). Often she’ll postpone making a decision until she’s certain she’s got every piece of information she can find—much to the frustration of Directors, who’d like things to move more quickly.

Problem-solving is of paramount importance to Thinkers. Imagine the character played by Jeff Goldblum in Jurassic Park and The Lost World. The Thinker possesses a marvelously honed ability to focus entirely on the problem at hand—often to the exclusion of the bigger picture. Thinkers can seem tedious at times. But details are not tedious to the Thinker. All those questions are crucial to getting the job done right. And their attention to detail can make Thinkers very valuable to have around.

As you might surmise, Thinkers tend to be more cautious than either Directors or Expressers. They play out scenarios in great detail in their minds, thus they’re likely to consider other people’s needs and feelings before acting. They like to discuss these details with others, to make sure they’ve considered every angle.

Thinkers tend to underestimate the amount of time they need to complete a project. Unlike Directors, who rarely miss a deadline, Thinkers will give themselves “extensions” in order to make sure the project is done correctly the first time.

In sum, Thinkers are the world’s problem solvers. They ask questions and revel in details. They may miss an occasional deadline, but no one is more superbly equipped than the Thinker to think things through.

Now let’s meet the fourth major style of communicating. Picture someone who listens to other people’s problems, someone who is steady and dependable, someone who will offer sympathy when your child catches the flu. Picture Ingrid Bergman in Casablanca or Gregory Peck in To Kill a Mockingbird. Or better yet, Mother Teresa.

These people—the Harmonizers—are caregivers and healers. They bring muffins to work in the morning. They give special presents on holidays. People naturally turn to them for comfort in times of trouble. They speak warmly and lovingly to other people, who in turn speak warmly and lovingly of them. Harmonizers may not be decisive or daring, but they keep people working happily together, often in subtle ways.

Harmonizers are attuned to people’s feelings, and they like to talk about people—not in the same animated or aggressive way Expressers do, but more quietly, with less attention drawn to themselves. They’re focused on the group’s well-being; one of the Harmonizer’s trademarks is being a team player. At lunch or at a company picnic, you’ll see the Harmonizers sitting together talking quietly—or not talking at all. Harmonizers aren’t trailblazers. In social situations, they’ll rarely say anything inflammatory or unconventional. Harmonizers prefer to fit in, not stand out.

Harmonizers seeks to avoid conflict. When a stranger comes into their midst, they are careful, guarded. You can only get to know them gradually, not right away. Because they like to please other people, they’ll say “yes” to something even though it would be better all-around if they declined. As a result, Harmonizers can take on too much and feel overwhelmed.

In short, Harmonizers are quiet, caring people who express pride in the accomplishments of the team. Without them, the world would be a far less caring place.

Here are four key points to keep in mind:

You may wonder whether men or women favor a particular style. There’s no evidence that they do. Some styles may strike you as slightly more “male” or “female” – or as more consistent with our traditional stereotypes of male and female behavior. But research shows that gender has no correlation to a particular style.

You may also wonder whether people from different countries or places of origin prefer certain styles. Our research shows that the styles are universal to all people. Yet certain cultural tendencies may favor one style over another, and a full appreciation of communication styles must factor in the particular habits of each culture.

One of the earliest efforts at understanding human nature was led by a school of Greek philosophers who maintained that people’s characters were determined by four special “humors.” Each humor was concentrated in a particular bodily fluid. High levels of blood resulted in an enthusiastic type; an excess of black bile resulted in a melancholy character; high amounts of yellow bile caused one to be irritable; and an excess of phlegm created a slow, apathetic personality.

In this lesson, you’ve learned about the four communication styles—a modern counterpart of the four “humors.” By training yourself to identify and understand each style, you’ll quickly learn to appreciate some of the subtleties in people’s communications—the hidden meanings behind their words, the types of things they pay attention to. This, in turn, will lead to more satisfying and more successful interactions.

Learn more about how communication styles affect our Leadership Styles.

IMPROVING YOUR COMMUNICATION WITH STRAIGHT TALK®

Leave a Reply to The Three Elements of Communication: Style, Intent, and Content Cancel reply

Subscribe to the Newsletter to receive the latest blog posts.

You'll also receive the PDF:
"10 Tips to Improve Your Communication"